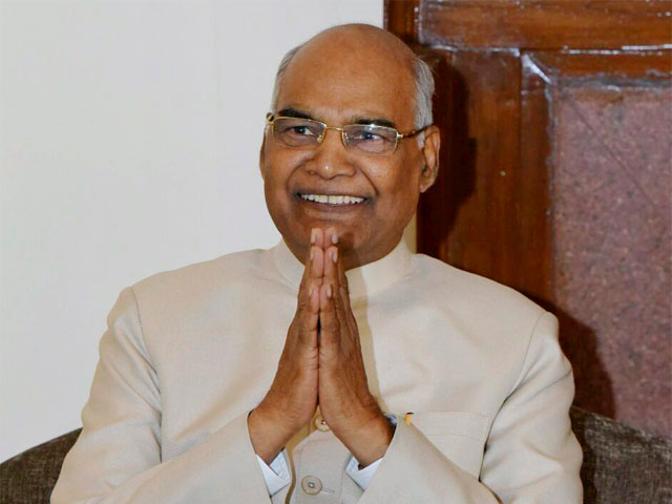 Shri Ram Nath Kovind (born October 1, 1945 at Kanpur Dehat in Uttar Pradesh)  won the  presidential election on July 20, 2017 and became India’s 14th President after taking the presidential oath in the presence of the Chief Justice of India JS Khekar on July 25, 2017. The swearing-in ceremony took place in parliament. Right after he was sworn-in  he was congratulated by the outgoing President Pranab Mukherjee and the speakers of Rajya Sabha and the Lok Sabha, Hamid Ansari and Sumitra Mahajan respectively. Among those attending the ceremony were the Prime Minister of India Narendra Modi, Congress President, Sonia Gandhi and top leaders and members from all political parties.

“We have to build an India of twenty-first century providing equal opportunities for all.” President Kovind said in a speech after being sworn in and promised “This land of Buddha will continue to be peaceful.”

With his election, the 71-year-old former lawyer and politician has become the 2nd Dalit  (members of lower caste) to occupy the Rashtrapati Bhavan (Presidential house) after the 10th President of India K.R. Narayanan (in office, 25 July 1997 – 25 July 2002).

Ram Nath Kovind was a lawyer who practiced in the Delhi High Court and the Supreme Court for 16 years. He first stepped into politics in 1994 when he was elected as a Member of Parliament (Rajya Sabha) with Bharatiya Janata Party (BJP) from Uttar Pradesh. He served for two consecutive terms for 12 years from 1994 to 2006. He represented India in the United Nations in New York and addressed United Nations General Assembly in October, 2002. He last served as Governor of the State of Bihar from 2015 till June 2017, when he was nominated by the ruling National Democratic Alliance (NDA) for the country’s top constitutional post.

The President of India is indirectly elected by an electoral college. This college comprises the directly elected representatives of the Parliament of India (both houses) and the Legislative Assemblies of each of India’s states and territories. The President serves for a term of five years and is bound by convention to act on the advice of the Prime Minister and Cabinet which in practice exercise all the executive powers.