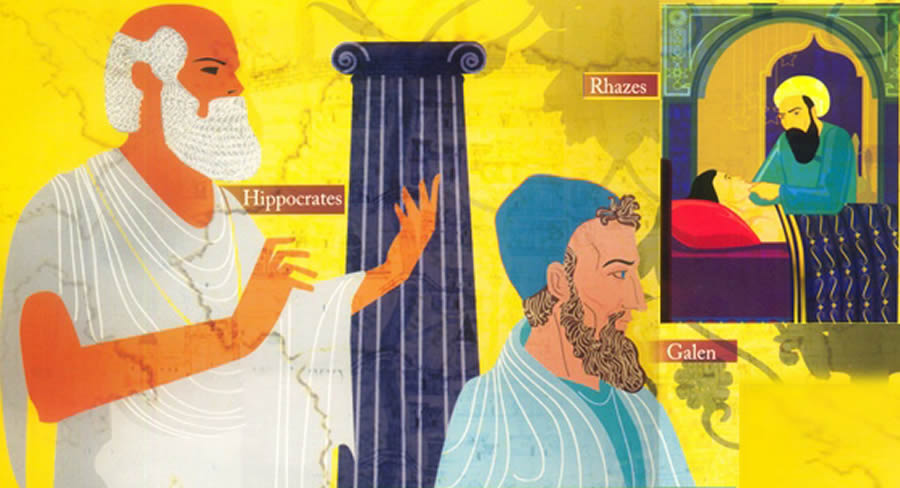 “Life is short while art (science) is long, time is short, the experience is mistaken and the decision is difficult.”

Aphorism from the Hippocratic reflection

The engagement with the history of arts and sciences in ancient Greece is full of enchantment. Art and science history is enchanting because through them one can better understand the present and foresee the future. This is all the more true for medicine which, for a long period of time, was characterized as art, later on as both an art and a science and today is considered as a science and applied technology.

Good health and well-being of humans who live in earthy surroundings has always and still is in need of the bright energy sent to us by the sun. Thus the first God of medicine, meaning the God who preserves life and defeats death, was Apollo, the God of light and rhythm. Even today folk wisdom repeats the phrase “Where the sun enters a doctor doesn’t”. Apollo is the child of Zeus (god of reason and the rational) and Leto (goddess of oblivion, Lethe) and the twin brother of Artemis, Goddess of half-light, the moon. God Apollo and the mortal Coronis gave life to a child called Asclepius who, as a half-God was brought to the earthly world and trained as a healer. His teacher was Centaur Chiron (half-human and half-horse) who had the knowledge to exploit the beneficent powers of the natural world. Asclepius soon acquired the reputation of the great healer and traveled around Greece healing people. The power of his work gave him the prestige of a God in a world of mortals. His sons and daughters supported his healing power as his helpers but as independent beings as well. His sons took part in the Trojan War as military doctors while his daughters were protectors and leaders of the doctors’ healing acts and performed health rehabilitation techniques with spiritual and bodily interventions.

In Greece at that time, there was a form of treatment provision which was based on the structure of Asclepeion. Asclepeion was the temple of healing intervention by the descendants of Asclepius, under the supervision of him and his family. This place constitutes not only the core of a building infrastructure but the crown of a multi-shaped and multi-productive intervention both in mental, psychological, physical and social functions of the human entity. In its basic form it includes theatre (drama-therapy), baths (spa-therapy), stadium (exercising), gardens (relaxation), kitchen (restaurants), bed-chambers (hotels), temples (impressive structures) and the Avaton (a quiet chamber half buried into the earth with dim lighting intended for deep sleep – ICU). Fast, diet, purification, drinking water from a healing spring, relaxation in a clean environment, theatre performance, listening to music, dancing, exercising, sleep induction, psychological shocks, pharmaceutical and surgical interventions combined with the most powerful weapon anyone can possess, which is faith to a higher power, deconstructs illness and provides the psychosomatic balance which leads to the cure. The final healing intervention is the sleep during which, while the patient is asleep in the Avaton, he/she comes in contact with Asclepius, his helpers and his sacred animals so that the cure can arise. The structure of the Asclepeion is directed by the priesthood. The priesthood, in the form of a health centre, offers healing through God Asclepius.

The Asclepeion centres acquired glory and fame and were invited to create regional branches. Thus a system of regional health centres was created being under the supervision of the central one. Their structure and their expansion were supported by donations from the reach patients and kings. Many of the Asclepeion centres, such as the one in the island of Kos, were converted to a neutral war zone during difficult circumstances in history so that political and military deliberations could take place between opposites powers for the benefit of peace.

Sixteen generations after Asclepius came his descendant, the eminent personality of Hippocrates (460-377 B.C.) who was known worldwide. He worked at the Asclepeion centres in the island of Kos and traveled offering his services not only to prominent personalities of that time but also after an invitation to cure deadly epidemics. He was concerned with the anatomic and functional structure of the human organism and evolved into a brilliant anatomist and physiologist. His logical methodology is the basis upon which medical thinking is developed until today. His moral views on medical practice are stated in the oath of Hippocrates. The oath, which has been translated in all the languages of the world, is the one that the graduates of medical schools give after the successful completion of their training. The healing interventions of that time were surgical and pharmaceutical. The means used for these interventions were the surgical tools, forerunners of the contemporary ones, herbs, and metals, which have evolved to today’s medicines and hypnosis. Since the age of Hippocrates the theory of “humors”, which derives from the philosophical approaches of Empedocles (495-435 B.C.) and Aristotle (384-322 B.C.), is beginning to form. Four are the humors of the human body: blood, phlegm, yellow bile and black bile and they are related to the four elements of fire, water, air and earth and the four characters of bloody, phlegmatic, choleric and melancholic. In succession, any other sequence of four is structured around them and is related to rhythm, orientation, psychism, temperature, diet, etc.

The theory of humors was developed and described in accuracy by the leading medical doctor Galenus (129-199 A.C.), and is even until today the basis of Ionian (Greek) medicine.

It is known to everyone that the prevalence of the church brought the dismantling of ancient Greek religion and worship, including the Asclepeion centres. Asclepius’ face was the only one that remained almost intact, resembling Jesus Christ in old Christian murals.

Christianity is a religion that teaches love towards our neighbor, and especially the one who feels physical and mental pain. New hospitals were established in which services were provided by ordained and deeply religious people, who also performed miracles with the help of God; they didn’t use the purifications of the springs but baptism and, in therapy, they followed the theory of humors which was rooted in Greek philosophers.  In Western Europe of Christianity, ancient Greek philosophy, science, and art were facing their dark days. In the East, members of a Christian sect originating in Asia Minor and Syria by the name Nestorians, established new medical schools, which were parts of a wider educational system, such as in Edessa of Mesopotamia in the 5th century, where the works of Hippocrates, Galenus and other distinguished Greek philosophers were translated into Syrian. Pursuant to that came the foundation of the great university in Godasaipur in southwest Persia where Greek, Persian and Indian medicine are met with each other and with the philosophies of these three countries.

The dynamic expansion of the Arabs dominated Persia, Middle East, North Africa and Spain and was attracted by their passionate desire to learn about Greek philosophy and medical science. In the caliphate of Baghdad, between 9th and 13th century, in the “House of Wisdom” – a centre for research, education, and translation- an enormous amount of money was spent in a long-lasting mental engagement for the understanding and translation of Greek texts into the Arab language. The Arabs, through these translations, rescued the Greek texts while the originals were being destroyed in Greece, Alexandria, and Rome. Two prominent Arabs, Rhazes (865-923 A.C.) and Avicenna (980-1037 A.C.), are the worthy doctors who carried on the Hippocratic and Galenus medicine and enriched knowledge with new elements from chemistry (alchemy), botanology (herbal therapy), which had already been documented by the famous doctor Dioscorides (40- 90 A.C.), and the technology of surgical tools with the application of new surgical techniques.

Later on, at the multinational centre of peaceful co-existence of Arabs, Jews, and Spanish, which is the city of Cordoba in Spain, Arab texts were beginning to get translated into Latin. In Europe, during the Middle Ages, these translations brought Greek philosophy and science, including medicine, once again in the spotlight. The Arabs, through their expansion towards south Asia, reached India. There, during the 12th century, the Arab-Greek medicine found suitable grounds to bloom because of the Hippocratic medicine infrastructure brought by that time by Alexander the Great. The Arab-Greek medicine was enriched by the already richly practiced traditional healing and thus the first centre was established in Lahore in 1160 A.C.

Consequently, Unani Medicine or Unani-Tibb was created. The names were given in honour of the Ionian medicine, which is less known than Ayurveda, due to the Islamic element being in minority in  India. Unani-Tibb is the system which observes the influence that the surroundings and ecological conditions such as air, food, drinks, bodily and mental movement and repose, sleep, wakefulness, excretion, and retention have on the state of health. Unani believes that it is this dominance which gives a person his/her individual habit and complexion. Unani practitioners do not only cure bodily diseases but also act as an ethical instructor.

Pharmacotherapy which involves the use of naturally occurring mostly herbal drugs (90%),of animal (4-5%) and mineral origin (5-6%) and finally Surgery. Today it is taught in universities in India and is practiced with positive recognition by the World Health Organization.

Ancient Greek medicine, the foundation of which was set by Hippocrates and Galenus, is active until today. Its widespread use by human societies is evidenced by the translations of Greek medical books principally into Arab, from Arab into Latin during the Middle Ages in Europe, as well as by the theoretical and practical application in South Asia of today.

Konstantinos Archontakis was born in Crete, Greece in 1953. He holds a degree in Medicine (1978) and has specialized in Internal Medicine (1985). He also holds a Doctorate in Acupuncture (Sri Lanka, 1995). He has worked as an Occupation Medical Doctor for many years and is currently working as a General Practitioner. He is using both conventional and alternative medical treatments.

Dr. Archontakis,  was elected as a board member of the Medical Association and  Municipality of Chania-Crete and has done multiple interventions in the field of medical care. He is an avid reader of ancient Greek, Chinese, and Indian Medicine, and has a keen interest in Eastern Philosophy, Ecology, and Nutrition.

An Interview with Konstantinos Archontakis (in Greek)