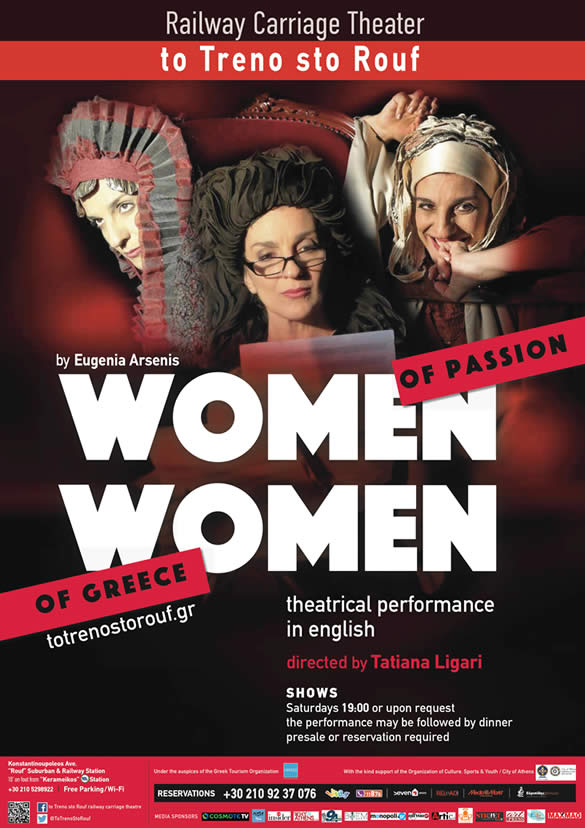 After a series of successful performances in Athens and tours in Australia and in Brussels, the theatrical production of the Railway Carriage Theater to Treno sto Rouf “Women of Passion, Women of Greece” participates in the 8th Theatre Olympics in India, taking place from February 17th to April 8th in New Delhi and 16 more cities in India.

The powerful theatrical play in English by Eugenia Arsenis with the distinctive directorial approach by the famous Greek actress Tatiana Ligari, creator of the Railway Carriage Theater to Treno sto Rouf, Evelina Arapidi’s heartwarming performance in the three iconic leading roles and the exceptional live music by Fotis Mylonas, was presented on February 26 at Kamani Theatre in New Delhi and on February 28 at Kalagrama Theatre in Bangalore.

Three mythical female figures, Medea, Maria Callas and Melina Merkouri, lead us on a life journey starting from Ancient Greece and finishing in Greece of today. The tragic ancient drama heroine meets the two great priestesses of modern Greece. A common feature unites their different paths, passion. Passion for life, passion for love, passion for creation, passion for freedom. History, culture, the power of the human soul, the struggles for democracy come alive by an actress and a musician, who accompany us to this fascinating journey of creative memory, humor and emotion where Greece is at the same time the starting point and final destination, with the feelings of people all over the world as stopovers.

The theatrical performance that is presented every Saturday at the Railway Carriage Theater, -the unique cultural venue in the world that operates in vintage wagons of the Orient Express inside “Rouf” railway station in Athens- was attended with great interest and emotion by foreign visitors and expatriates, students, Greek and international audience.