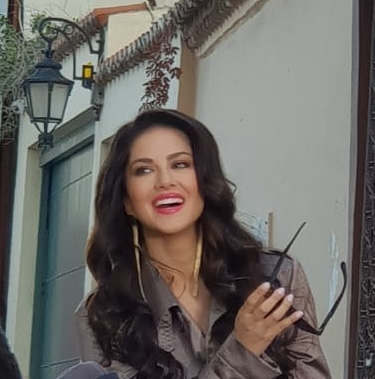 Bollywood star Sunny Leone arrived in Athens in the first week of November 2018 for the production of a video clip for the song entitled “Hollywood wale Nakhre”, in which she features the leading role. She was accompanied by her team and the young and promising singer from Mumbai, Upesh Jangwal.  All were excited for being in Greece for the first time and to dance together with young Greek artists in the city where the theatre was born and the greatest playwrits of all times lived.

When Sunny was asked about her project in Greece, she had only one thing to say: “The team is like an extended family for me, and to be a part of a dream makes me feel on top of the world.” She loved the track and was enjoying every bit of the shooting.  “An outdoor shooting with the close ones is like a holiday at work,” she said. Her favourite part of shooting in Greece was in Plaka, the old city of Athens, under the glorious Acropolis hill, where she was so comfortable with the vibe. She could easily sit at any restaurant in the middle of the shooting finding it comfortable and welcoming. Being a vegetarian, she loved the vegetarian Greek dishes very much.

During her stay in Athens, Sunny Leone had the opportunity to teach bollywood dance to some young Greek dancers.

“Hollywood wale Nakhre” is a “UK-Punjabi hip-hop number”, composed by Tanveer Kohli and Gurashish Singh and sung by Upesh Jangwal. It has been produced by Hitendra Kapopara and Ravinder Jeet Dariya and has been released by Zee Music Company in the of 2019. Hitendra, who has been Sunny’s stylist for years now, made also his first production with the famous Bollywood actress. His collaboration with his co-producer Ravinder Jeet Dariya helped the project shape up in Greece, which obviously changed the feeling of the song. Mr Dariya has worked on several film and video-clip productions in Greece and has established a branch of his own film company “Big ” in Athens.