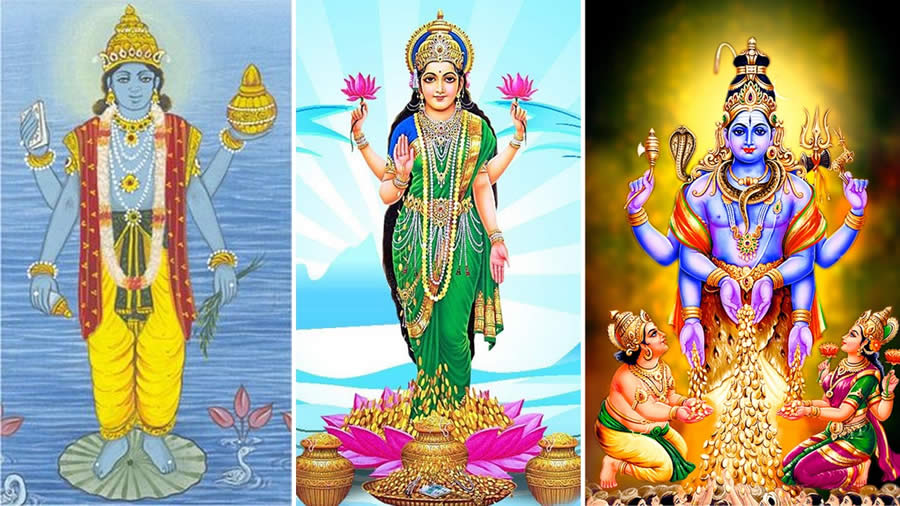 Dhanteras (धनतेरस) is a very big and important Hindu festival of health, wealth, and prosperity. It is celebrated every year on the thirteenth lunar day of Krishna Paksha (dark fortnight) in the Hindu lunar calendar month of Kartik. The word ‘Dhan’ means ‘wealth’ and ‘Teras’ implies 13th and that is why it is known as Dhanteras.

The festival marks the first day of Diwali celebrations in India. According to Hindu traditions, the goddess of prosperity Laxmi Devi and the god of wealth Kuber appeared on this day during the churning of the ocean in the beginning of creation (Samudra Manthan). People worship Goddess Laxmi and Lord Kuber. and purchase new things, especially gold, silver, and jewelry which is considered to be an auspicious activity on this day.

Dhanteras is also celebrated as ‘ Dhanwantari Jayanti, the birthday of the Lord of Ayurveda and medicine. Lord Dhanvantari, according to Hindu scriptures, emerged also during Samudra Manthan, holding a Kalasha full of Amrit (the drink of immortality) in one hand and the sacred text of Ayurveda in the other hand. He is considered to be the doctor (vaidya) of Gods.

National Ayurveda Day was observed for first time on Dhanwantari Jayanti in 2016 and since then it is celebrated on this day after the decision of the Indian ministry of Ayurveda, Yoga and Naturopathy, Unani, Siddha and Homeopathy.