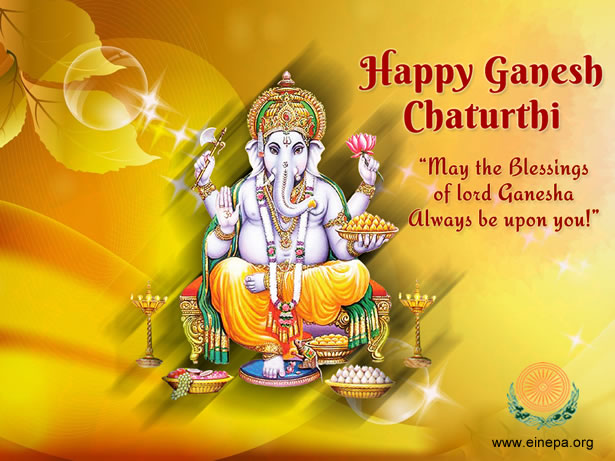 Ganesha Chaturthi also known as Vinayaka Chaturthi is a ten-day Hindu festival that reveres lord Ganesha’s birthday. The elephant-headed lord is the younger son of Lord Shiva and Goddess Parvati. He is considered as the lord of beginnings and is believed that he grants  freedom from hindrances on the path of spiritual life and to the accomplishment of any new undertaking.  Ganesha is known by 108 different names, but is widely referred to as Ganapati or Vinayaka.

The festival begins on the fourth day (shukla chaturthi) of the waxing moon of the Hindu month Bhadrapada (August or September in Gregorian calendar), ending on Ananta Chaturdashi. During the festival, the worshipers install an idol of Shri Ganesha in their homes, or publicly in colorful pandals (temporary shrines). Observations include chanting of hymns, prayers and fasting. Offerings and prasada from the daily prayers, that is distributed from the shrines to the community, include sweets such as modaka and laddu believed to be favorite of the deity. The festival ends with the  immersion of the lord’s  clay idols in the river (Ganpati Visarjan).

The festival was celebrated as a public event in Maharashtra since the time of Maratha King Shivaji (17th century), but it was Lokmanya Tilak (1856-1920) who established the festival as a grand public event all over India. Ganesha Chaturthi is also observed in Nepal and other countries where there is a significant number of Hindu diaspora.