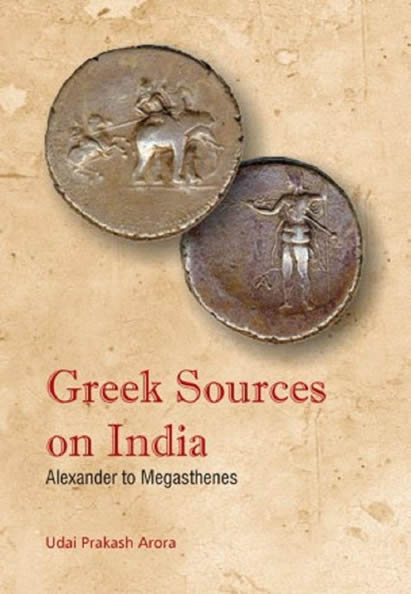 “Anyone who is surprised that with so many historians already in the field on Alexander it should have occurred to me to compose this history, should express his surprise only after perusing all their works and then reading mine”, remarked Arrian in the second century AD. Today after 1900 years the trend on Alexander is the same. Books on Alexander continue to appear, all written mainly by Western scholars. No dearth of works has resulted in giving birth to many faces of Alexander. The justification furnished by each of them for their Alexander is not much different from Arrian’s time.

It was Alexander’s conquests in India which remained the most fascinating subject in the writings of the historians. A.K. Narain has pointed out that “what remains of Alexander would be shorn of all its romance and glory if his campaigns in Sogdiana and Punjab were deleted and there were no Spitamenes and Poros, Scythians and Malloi”.

The narrative of Alexander and the stories developed around the Romance, which have been repeated quite often, do occur in this work too, but the main focus here is not on Alexander’s exploits but on the critical commentary of the accounts of India, penned by the emperor’s companions and the Hellenistic ambassador, who was deputed to the Magadhan court at Pataliputra. These included mainly Onesikritos, Nearchos, Aristoboulos, Ptolemy, Chares, Kallisthenes and Megasthenes.

The present work is divided into three main sections. The first section is devoted to a discourse on Alexander and the interaction of India with the Hellenistic world. The veracity of the Greek fragments of India as furnished mainly by Nearchos, Onesikritos, Chares and Megasthenes have been examined in the second section. In the last section the English translation of all the survived fragments of Alexander’s companions and of Megasthenes have been made available to scholars at one place for ready reference.

This is a publication which Sir John Boardman, the leading savant of Classical Studies, finds as ‘the inauguration of a new generation of Greco-Indian Studies’.

Foreword — Sir John Boardman
An Appreciation — Frank L. Holt
Acknowledgments
Abbreviations
Introduction
Part I
INDIA, ALEXANDER AND THE HELLENISTIC WORLD
1. Ancient Greek Historians on Alexander
2. Unification: Macedonia and Greek States
3. Destruction of the Achaemenian Empire
4. Alexander in India
5. Policy of Fusion, Deification and the Last Days
6. The Impact of Alexander
7. Two Faces of Alexander
8. Ionia, Alexandria and Baktria
Part II
APPRAISAL OF THE FRAGMENTS ON INDIA:
ALEXANDER’S COMPANIONS & MEGASTHENES
9. The Account of Nearchos’ Voyage
10. The Fragments of Onesikritos on India: An Appraisal
11. Chares’ Fragments on India
12. The Veracity of the Indika of Megasthenes
13. Dichotomy in Greek and Indian Sources: Baktria vis-a-vis Gangetic Valley
14. Greek Accounts till Alexander on Urban Traits in Northwest India
15. Classical Accounts on India: Some Observations

Udai Prakash Arora is well known for his pioneering works in the field of Graeco-Indian Studies. He started his teaching career at Allahabad University (1965–1985). Thereafter he was  Professor and  Founder   Head, Department of Ancient History and Culture, MJP Rohilkhand University, Bareilly (1985–2006), where he also acted as Pro-Vice-Chancellor (1995) and twice as Acting Vice-Chancellor. In 2006 he was invited by Jawaharlal Nehru University (JNU), New Delhi to occupy the position of Professor of its prestigious Greek Chair. After his retirement, he has reappointed Visiting Professor of Greek Studies in JNU from 2009 to 2014.

Professor Arora has 4 books and 13 edited volumes to his credit. Among his important publications include Motifs in Indian Mythology, Their Greek and Other Parallels (1981), Graeco-Indica (1991), Greeks on India (1996) and Yunan Itihas aur Samskriti (in Hindi, 2010). He has contributed nearly 120 articles in various journals. He is founder General Secretary of Indian Society for Greek and Roman Studies and edits its annual journal Yavanika. He was General President, UP History Congress (1996–97) and Sectional President (Ancient India), Indian History Congress (2002). As a visiting fellow, he has traveled to the U.S., Canada, and several countries in Europe, Asia and Africa. He is a recipient of the most prestigious Greek civil honor ‘Golden Cross-Order of Honour’ from the President of Greece (1996). In his honour was published the felicitation volume, Udayana: New Horizons in History, Classics and Inter-cultural Studies (2006).