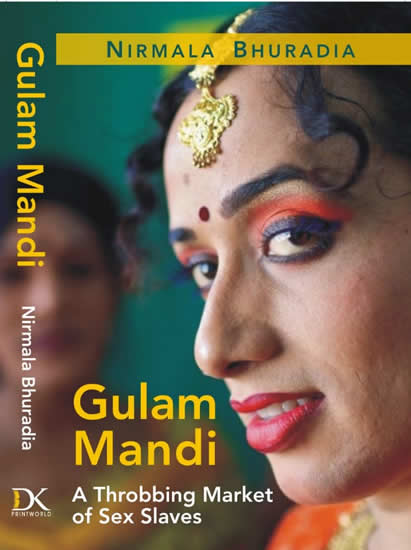 Gulam Mandi would mean a market where some unfortunate human beings are put on open display, to be picked up by customers, for the purpose of slavery; living at the mercy of their masters, these men and women would be made beasts of burden or prostitutes. We the people of the 21st century believe that we have left behind this disease of the middle ages. This is not true. The business of slavery goes on subtly, secretly and on a full scale. This is modern-day slavery that is Human Trafficking. My novel deals with this. I had been invited by the United States Government to study the phenomenon of Trafficking in Persons at an international level. I have visited so many places related to the subject in India also, so my experience is first hand.

Though my novel is set against the backdrop of a portrait of the flesh trade, there are significant subplots which taken together constitute the body of this novel. It has two protagonists Kalyani and Janki. It is a story of love, rejection, and redemption; a mother’s search for her daughter and a daughter’s search for love and dignity. The adopted daughter Janki comes from a deprived background and suffers the humiliation of coming from a “lower” caste. The reality of casteism in fact runs through the entire novel. The mother-a has-been beauty queen-possessed of wicked envy for her adopted daughter’s youthful beauty casts her out of the house. But soon in the grip of feverish remorse and repentance, she seeks to find her daughter and befriends a eunuch Anguri and through her a group of eunuchs. An authentic detailed account of the eunuch’s world has been given space in the novel. I myself have done hands-on research by visiting their homes.

The daughter Janki, meantime, been trafficked to the United States and finds herself hopelessly trapped in the seedy underworld of strip clubs. There, she meets trafficked women from all across the globe, unlike her in so many ways, but like her enslaved in the life of a sex worker.

Then there is a man Gunghru whose entire character is permeated with moral depravity- sells his daughter Laxmi to greedy Mahawat Bherulal, who pushes her into brothel-bazar. She subsequently spends life in many brothels from Kamathipra Mumbai to the border of India-Bangaladesh- where there is a proliferation of Jhuggi-brothels. Along with the turbulent world of human trafficking, many other issues are interwoven in the main story. Like a society where Brahmanism is still prevalent, untouchability still persists, a life of a beauty who fears aging. Then there is Meera, a female elephant and the fascinating world of elephants. Also, people from exotic India who understand animal language.

As we all know, in India, people with ambiguous gender are treated with terrible contempt. They are social outcasts who are forced to live a life of penury in ghettos; as they can not live and mingle with the mainstream. My novel talks about their shadowy world and the separate reality. But I was careful enough to not give an account of hijras seen from outside. It was important to know their minds, their psyche, and circumstances and therefore to meet and understand them.

Nirmala Bhuradia is an Indian journalist and writer who writes in Hindi and English. She has published nine books in Hindi. For long years she was with Hindi daily Naidunia as one of the editors. At present Editorial Adviser with Webdunia. She is a winner of many prizes and awards.