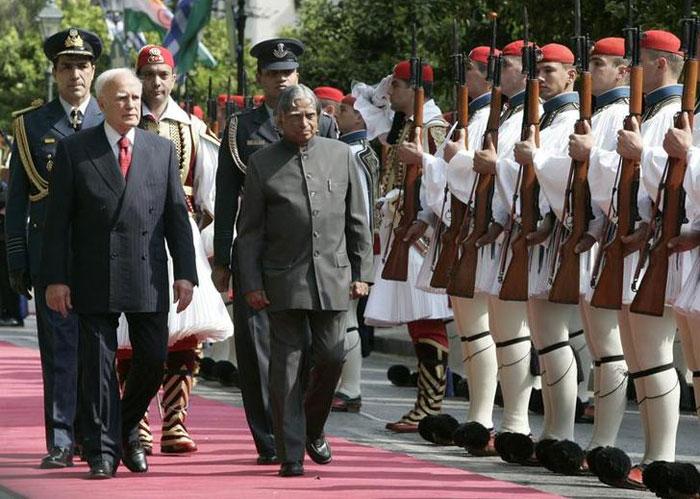 The President of India, Dr. A. P. J. Abdul Kalam made a State visit to Greece from 25 to 28 April 2007, leading a high ranking delegation consisting of Mr. Vilas Muttemwar, Minister-in-charge of the Ministry of New and Renewable Energy, Mr. Pyaremohan Mohapatra and Mr. T. R. Zeilang, Members of the Rajya Sabha; four eminent scientists, and senior officials. This visit comes 21 years after the last State visit by an Indian President to Greece in Nov 1986, and highlights the growing interaction between the two countries in various fields.

President Kalam met with his counterpart President Karolos Papoulias,  the Prime Minister Kostas Karamanlis,  the President of Parliament Prof. Anna Benaki- Psarouda and the Mayor of the City of Athens, Dr. Nikitas Kaklamanis who awarded him the Gold Medal of Merit of the City of Athens. He also met with distinguished personalities, including Mr. George Papandreou (President of Socialist International and leader of the Opposition), the Minister of Development and of Tourism, and academics including the President of the Hellenic-Indian Society for Culture and Development Dr. Dimitrios Vassiliadis. A reception was hosted in his honour by the Indian Ambassador. President Kalam delivered a keynote address to a distinguished gathering organized by the prestigious think tank, the Hellenic Hellenic Foundation for European and Foreign Policy (ELIAMEP), on “Dynamics of Peace and Prosperity” where the students of Hindi and Indian History and Culture have also been invited.

The President’s engagements included a visit to the Hellenic Aerospace Industries complex (HAI) and the National Council for Scientific Research “Demokritos” where he delivered an address to the scientific community on “Convergence of Technologies” and visited research facilities. He also visited the Hadzipatreion rehabilitation centre for children with cerebral palsy and presented ten computers in support of the centre’s activities. President Kalam paid a visit to the Phaleiron War cemetery in Athens, where there are graves of Indian servicemen who died during World War II.

Visiting President APJ Abdul Kalam got a pleasant surprise when he was welcomed by Greek President Karolos Papoulias in Sanskrit at a banquet hosted in his honour.

The Greek President told Dr Kalam that he learnt Sanskrit, the ancient India language that is related to the ancient Greek language, in Germany and used the language with such a rich history to welcome the Indian President.

He said ‘ India and Greece were the birthplaces of great civilizations, which at certain point of time, in the era of Alexander the Great, met and formed an entirely particular relationship between them.”

Replying to his welcome, Dr Kalam said he was happy to be in Greece which has contributed so much to civilization. ”Greece is the crucible of democracy and India is the World’s largest democracy. My visit has been a rewarding experience,” he said.