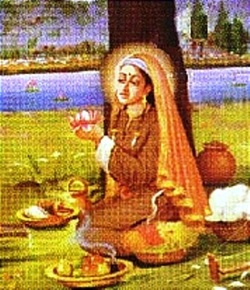 The Hukus Bukus is one of the most popular songs of the Pandits of Kashmir, who after the domination of Islam have been displaced from their homeland. The message of this poem is rooted in the spiritual tradition of Kashmir. Some say it was composed by the last great mystic and poetess of Kashmir Saivism, Lalleshwari (also known as Lal Ded, 1320 – 1392). The poem, in later years, became a song for children and served as a poetic medium to convey the essence of the philosophy of Kashmir to kids and adults though very few could understand it.

It is said that the tones produced by the arrangement of words in this poem as well as its rhythm has a calming effect for infants and toddlers of all times.

Here are the words of the poem in the language of Kashmir and the basic meaning in the translation.

Tse Kus Be Kus Teli Wan su Kus = Who are you and who am I, then tell us who is he the creator that permeates through both you and I

Bhruman daras Poyun chokum = It feels like my mind is bathing in the water of divine love (Bhruman = nerve center in the human brain, poyun = water)

Tekis Takya bane Tyuk = Then I know I am like that sandal wood which is pasted for divine fragrance symbolic of universal divinity. I realize that I am, indeed, divine (Tyuk = Tika applied on the forehead)