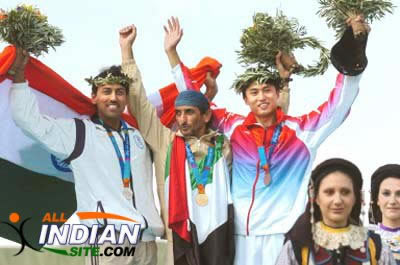 Τhe ATHENS 2004 Olympic Games was a great celebration, when for 17 days the games returned to the country of origin. More than 21.500 representatives of the Mass Media covered the Games and four billion viewers all over the world watched them on television. They all saw Modern Greece, inside and outside the stadiums.

These Games broke many records: Athens hosted 11,099 athletes, the largest number ever and also the most women athletes ever. Representatives of 202 countries took part, more than any other sport event. The Olympic flame with a message for peace and universal brotherhood traveled for the first time to all continents and it was welcomed in New Delhi as well.

India, which had produced only three individual bronze medals in Olympic history — Khashaba Jhadhav in Helsinki 1952, Leander Paes in Atlanta 1996 and Karnam Malleswari in Sydney 2000 — sent her athletes with high expectations, but the team from the world’s second most populous nation returned home once again with a solitary medal.

Army major Rajyavardhan Singh Rathore became a national hero when he finished second in the men’s double trap-shooting event. The 34 year-old army man’s score of 179 (135 in qualifying and 44 in the final round) gave him a silver medal, India first individual silver in Olympics. Elated with his performance, Rathore said, “It doesn’t give me satisfaction that I am the first one or something like that. I think there are many, many more medalists and I hope in future we will produce many more medal-winners.”

A pleasant surprise to India came from the 2004 Athens Paralympics, when javelin thrower Devendra Singh won gold with a world record. Weight-lifter Rajinder Singh Rahelu also won bronze. India’s 23-year old Devendra improved his own world mark to win the country’s first gold medal in the javelin throw, category F44/46. Devendra had lost his hand in a childhood accident but what he didn’t lose was his will power to win a gold medal.

Mr. Chazhur V. Gangadharan, an Indian engineer and founding member of ELINEPA, who was working in Athens at that time, narrates his first hand experience from the preparation, expectations and final performance of the Indian team in the ATHENS 2004 Olympic Games. (To read his article press HERE).