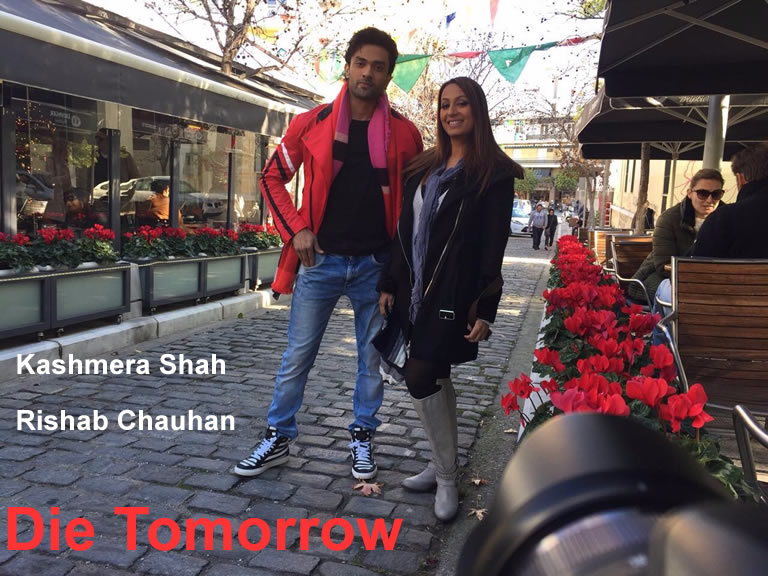 The beautiful city of Kavala seems to have enchanted the famous actress of Bollywood and former Miss India, Kashmera Shah, who visits the historic city of the Eastern Macedonia for a second time this year to complete the filming of her latest movie “Die Tomorrow”. In this film, which is a production of her own, herself and Rishabh Chauhan, a young talented actor and a rising star of Bollywood, are starring. Αctors from the theatrical group of Kavala also participate playing minor roles in the film with the shooting to last for 11 days.

The leading Indian actress is accompanied by a selected team of experienced filmmakers as all outer shots are to be completed in and around the city of Kavala, bringing out its unique beauty of the mountain, the air and the sea.

Kashmera Shah’s production is the second international feature movie to be filmed in the city of Kavala following the Hollywood production of Julles Dassin “Topkapi” in 1964 with Peter Ustinov and Melina Mercouri and is going to be shown at many film festivals in India and around the world, making the blue city more widely known to the millions of Bollywood lovers. “Die Tomorrow” is a story about a young man (Rishab Chauhan) who has lost any interest in life. In that desperate situation and while he is preparing to commit suicide, he meets a young lady (Kashmera Shah) who promises to help him have a painless death. The only prerequisite for him is to die tomorrow. The young man agrees and accepts to pay for it, though he gives her a one-week deadline. But that week, that unforgettable week, which they spend together in a magical Greek city, the young man realizes how beautiful life is and finds a reason to live.

President of the Public Benefit Organization of the Municipality of Kavala “DIMOFELEIA” Ms. Anastasia Iosifidou, who has invited Kashmera Shah and her team, strongly believes in this cooperation and for that reason she has made special efforts over the recent years promoting her city’s  name in India, where Kavala won last year the most promising new destination award in India’s largest tourist exhibition “OTM”  with the slogan, “Travel to the land of Alexander the Great” (सिकंदर महान के देश की यात्रा).

The expected revision of the current Greek legislation at the beginning of 2018 that will provide financial incentives to foreign filmmakers will attract more Indian productions. Several Indian movies have already been filmed in Greece helping to further strengthen both the friendly relations between the two peoples and the Greek economy.

Press conference: Extract from the speech of  the Mayor of Kavala Dimitra Chanaka