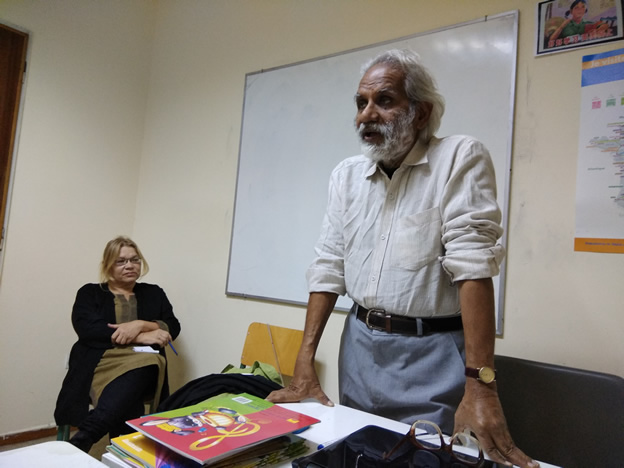 Prof. Dipak Malik, Emeritus Director of the Gandhian Institute of Studies, Varanasi, India, delivered a lecture on the theme “Mahatma Gandhi and Hindi as the National Language of India” on Friday, December 1, 2017, 18:00-19:30 hrs, at  the School of Foreign Languages, University of Athens  (5 Stadiou str., 3rd floor, room 314).

The lecture was followed by a discussion, which was also attended by  Indologist Dr Miriya Malik (Director of the Center for the Study of Indian Languages and Society, Varanasi, India) and Indologist Professor Dr Dimitrios Vassiliadis (School of Foreign Languages, University of Athens).

The lecture was attended by the Cultural Attache of the Indian Embassy in Athens, Mr. Gopal Ram, Ambassador’s Secretary Mr. Navin Mogha and his wife, ELINEPA’s General Secretary Mr. Antonis Papadopoulos, President of the Greek-Indian Cultural and Welfare Association Mr. Maghar Gandhi and many old and new students of Hindi students from the School of Foreign Languages and the Athens Center for Indian and Indo-Hellenic Studies.

The eminent scholars have been invited from India by the Hellenic-Indian Society for Culture and Development to strengthen the cooperation between their institutions and the Athens Center for Indian and Indo-Hellenic Studies in the fields of the Indian languages and culture.