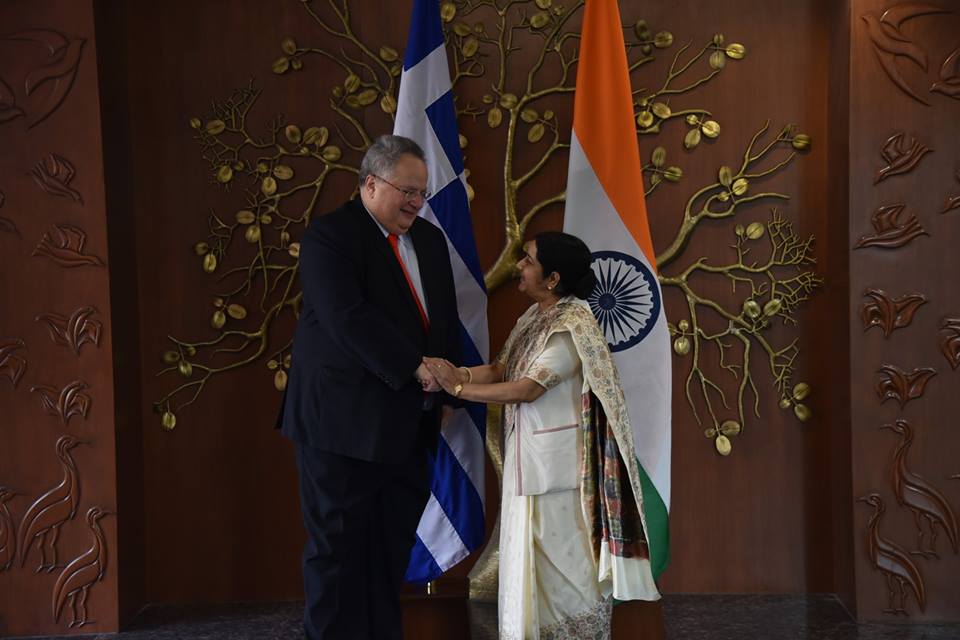 Minister of Foreign Affairs Nikos Kotzias made an official visit to India on 26-28 November 2017. During his visit, he met with Indian counterpart Sushma Swaraj and the Minister of State for External Affairs, Mobashar Jawed Akbar.

The minister’s talks focused on current affairs and ways of enhancing bilateral relations, including an expansion of tourism cooperation, trade fairs, agriculture, maritime sector, culture and attracting investments. The two  ministers signed also an agreement on air transport and a memorandum of cooperation in the renewable energy sector.

Mr. Kotzias subsequently spoke at the Observer Research Foundation on the subject of Greece’s role and initiatives in the region of Southeast Europe and the Eastern Mediterranean. The Greek Foreign Minister said that Greece is a pillar of stability and security in the region seeking friendly relations with all its neighbors, while he stressed that: “All Balkan countries should integrate into the Euro-Atlantic structures. Irredentism and nationalism must be abandoned. In the Balkans, we need to perceive history as a school, not a prison.”

The Greek Minister supported the persistent request of India to join as a permanent member of the UN Security Council, saying that this is now a necessity for the new balance of power emerging in the world. “India is the second most populous nation. In 10-20 years, or even before, it will be the most populous state. You cannot keep such a nation-state outside the Security Council,” Mr. Kotzias said answering to a journalist’s question.

On other questions concerning the Greek economy and the role it could play in Southeastern Europe, he said: “Greece’s GDP is very small, almost 250 billion euros, compared to the world, medium in regards to the European Union, but large in regards to the region.” He also asserted that despite the economic recession, the country has strong democracy which is “embedded” in the Greek society.

Mr. Kotzias also visited the Gandhi Smriti, the house (now a museum) where Mahatma Gandhi spent the last 144 days of his life and was assassinated on 30 January 1948, and pay tribute to the Father of Modern India. He  departed from New Delhi on November 29 and continued his trip to Singapore and South Korea.

5-6: Speech of N. Kotzias at the ORF Think Tank in Delhi (twitter.com/GreeceMFA)

7-8: Visit of MFA N. Kotzias at the Gandhi Smriti  (twitter.com/GreeceMFA)