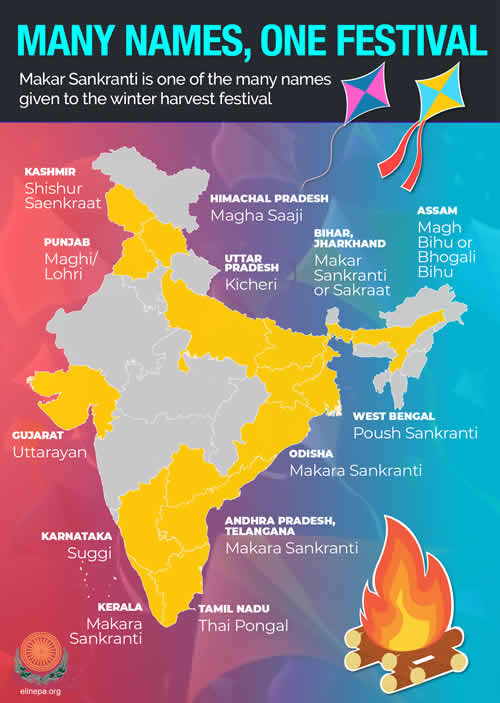 Makar Sankranti (also spelled Makara Sakranti or Sankranthi) is a winter harvest festival that marks the transition (Sankranti) of the Sun from Sagittarius to Capricorn (Makara) during the winter solstice in the auspicious northern hemisphere (or the beginning of Uttarayana). The festival is dedicated to the Hindu Sun God (Surya Deva) and is celebrated all over India and Nepal.

Makar Sankranti is one of the few ancient Hindu festivals that are observed according to solar cycles, while most festivals are set by the lunar cycles of the lunisolar Hindu calendar. Being a solar festival it almost always falls on January 14 according to the Gregorian calendar, except in rare years when the date shifts by a day for that year.

The festivities associated with the Winter Harvest and Makar Sankranti are known by various names in different regions of India such as Lohri by north Indian Hindus and Sikhs in Punjab, Pongal in Tamil Nadu, Maghi in Himachal Pradesh and Haryana, Magh Bihu in Assam, Poush Sangkranti in West Bengal, and Sukarat in central India. People celebrate this festival with traditional foods and sweets such as til ladoos made of sesame seeds and jiggery, gajak and anything related to sugarcane that are offered to ancestors who have died and distributed amongst friends and family. They also make colorful drawings on the ground with chalk or flour, called “Rangoli” in Hindi or “muggu” in Telugu, in-home entrances and streets. Kite flying is also a tradition of Makar Sankranti in many parts of India.

Spiritually, the sun signifies eternal light, magnificence, and wisdom. Makar Sankranti, therefore, states that we must leave behind the darkness of the illusion we live in and gladly allow the light within us to shine brighter and brighter.