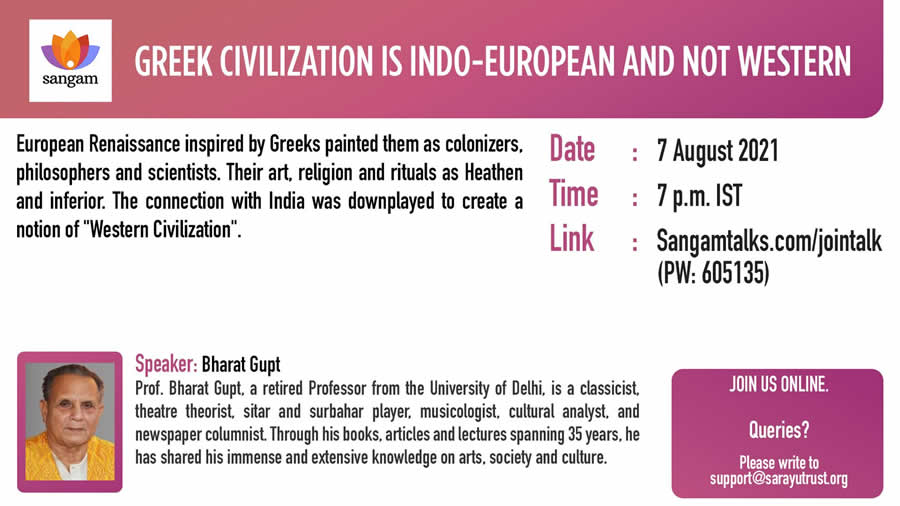 Eminent Scholar Dr. Βharat Gupt will deliver an online speech on the theme:
“Greek Civilization is Indo-European and Not Western”

About the theme
European Renaissance inspired by Greeks painted them as colonizers, philosophers and scientists. Their art, religion and rituals as Heathen and inferior. The connection with India was downplayed to create a notion of “Western Civilization”.

Bharat Gupt the President of the Hellenic-Indian Friendship League and a former Associate Professor in English at the  University of Delhi is an Indian classicist, theatre theorist, sitar and surbahar player, musicologist, cultural analyst, and newspaper columnist.

Bharat Gupt is the author of several research papers and articles on Indo-Greek themes, and of the book “Dramatic Concepts – Greek and Indian” (first published in 1994, reprinted in 1996 and in 2006). He has been Co-Editor of the Sanskrit-English- Greek Dictionary of Dimitrios Galanos, the 18th century Greek Indologist.

He organized and took part in several conferences on Indo-Greek Studies in Greece and India, with most recent one – the International Conference on “Demetrios Galanos and His Legacy: Indo-Greek scholarship 1790-2018” that took place in New Delhi and Varanasi in February 2018.