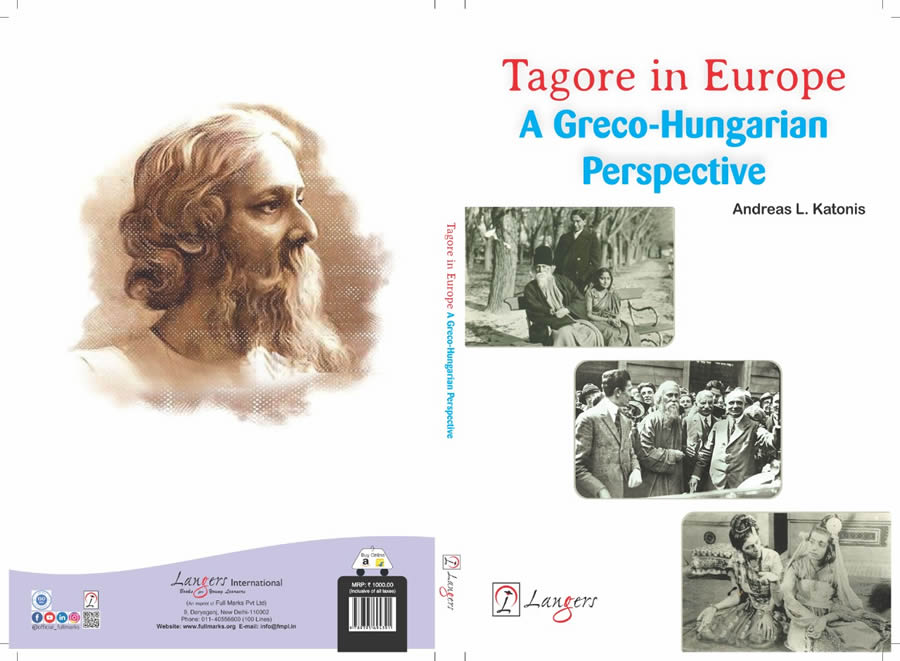 Andreas L. Katonis offers a new, rich in details contribution, to Rabindranath Tagore’s 1926 visit to Europe, narrowed down to two among the numerous countries seen by the Indian poet, Hungary and Greece. The book has been published in India, and thus there is now a welcomed cultural bridge between Tagore’s native land and the two other countries where a sympathy for India is undeniably and understandably present until today.

The underlying assumption for selecting the material, for which the Author has made an extended philological and archival research, was that the interested international audience knew relatively little about the two visits, first because Tagore called on – in almost the literal sense – the whole world (travelling was his dharma as he stated himself) and, to be sure, there are more important names in the row like England and Germany e.g., and, second, despite the fact that Tagore arrived in Greece coming from Hungary (via Rumania) neither the Greek audience knew anything about what had preceded the visit in Greece nor the Hungarian audience was aware (and was not interested either in) what followed Tagore’s long and eventful sojourn in their country, continued in a short but imbued with warm feelings and much enthusiasm stay in Greece. What the average educated audience knows in the first case is that Tagore had arrived from Germany (where he met Albert Einstein), then Czecoslovakia and Austria followed, and subsequently, from Vienna he arrived in Budapest. In the second case, the only common knowledge is that Tagore continued his travel to Alexandria, Egypt, where in the given moment still a numerous Greek diaspora was living. And a third point is, that in India they do not know much about Hungary and about contemporary Greece, if not only about Greece’s glorious past. And yet, the Hungarian contribution either to Indological studies in general or to Tagore personally, is rather extended and important, whereas contemporary Greece, besides trying to come equal to its unique ancestry, is on the outlook to be an equal member of the international course of human affairs, culture and everything else included. Indeed, a considerable number of Tagore’s writings is available to the Greek readers in translation, and this tendency is continuing even in our days. One more setback which may have inspired the compilation could be the insight that the three countries have obvious linguistic difficulties in understanding each other. This difficulty cannot be bridged over in other way than either by learning each other’s languages or by finding a common one, like English, and discovering how to access through this medium what has been said and published mutually.

The Author, formerly a Visiting Professor at the Chair of Greek Studies in Jawaharlal Nehru University (New Delhi), graduated in classics, with a subsequent PhD in linguistics, has made a comprehensive research both in Hungary and in Greece. The outcome is the present book containing fourteen essays and three Appendices.

Among the papers, two are published in Greek and two in Hungarian (all with English summaries), the rest is in English.

Appendix A gives an overview of Tagore’s Greek Bibliography, and Translations of his works.

Appendix B has the same for Hungarian (i.e., it contains what has been written on Tagore by Hungarians either living in their country or abroad, and which writings have been translated, sometimes more than once).

Appendix C has various contents: some details on the 1930 Delphic Games (to which Tagore was invited though unfortunately did not attend), a picture of his 1913 Nobel Prize in Literature, four pages of the newspaper Vradini covering his visit to Athens, some photos taken by the Author at Lake Balaton and in Budapest, Hungary, and more.

The articles vary from pleasurable to read (such as the Contributions to the Romain Roland Memorial Volume) to deep philological investigation (like “Opposing a strong will” in its extended form “II”). A due satisfaction has been entrusted to the thinker and poet Angelos Sikelianos, one of the greatest figures in Modern Greek culture, a contemporary, and also an approximative European equivalent of Rabindranath Tagore, an important author for Greece, even if less known world-wide. Efthalia Papadaki’s remarkable finding, a letter from Tagore to Sikelianos, first published in the Tagore-Festschrift edited by Dimitrios Vassiliadis in 2016, is republished in the frame of an imagined “Indo-Graeco-Italica” project. It is important to know that the Sikelianos-couple was active in the invitation of Tagore to the Second Delphic Games held in 1930.

As the book shows, the Author was repeatedly detained by the ruler-subject complex, shown in cumulative discussions for which the Antigone – Kreon in Sophocles’ homonymous play and the Srimati Nati – Ajatashatru oppositions in Tagore’s Natir Puja have been chosen, culminating in a long comparative analysis under an intentionally equivocal title alluding to “strong wills”. It is at this point that the “anti” factor (basic in Sophocles’ Antigone) is shown to be a key element. The heroine who appears in more than one works of Sophocles is not only an “anti” (=disobedient)-hero, and not only an “anti”-fruit of a womb, but is more, what the Greek anterior word constituent permits, is a “substitute”. To understand the last insight, it is enough to think of the Greek word “antikatastasi” (αντικατάσταση) which means ‘substitution’. Antigone has all these avatars in the Greek tradition, and it is assumed that the contemporary audience was aware of this semantic fluctuation with Sophocles, an “ambiguous” author from the very first, playing on it.

Comparing a modern 20th century author and one from the 5th century B.C., it is argued, is not an anachronism: there is structural similarity, the contents are similar, and the plot for Tagore’s Natir Puja has been taken from a Buddhistic legend from the 5th century B.C. Tagore’s play about the defiant palace-dancer is certainly remarkable and worth of reading: opposing earthly law and obeying another, thought to be divine, comes into prominence in a similar way as does in Sophocles, and the aftermath is similarly fatal. The paper is complemented by a linguistic analysis of the names, by comparative charts, maps and a rich illustrative material.

Two Appendices contain a detailed bibliography each counting up both texts (papers, essays) on Tagore and his works translated into Greek and into Hungarian. The Author has had the good fortune to have a close look at the Golden Book of Tagore published in 1931 which is a happy thing because the work, accessible online, is inferior. The “Golden Book” contains the famous dedication by Kostis Palamas (reproduced in the book, with Greek typescript and translation added), and also by Hungarians, though shorter in extent.

The Greek part of the Bibliography (articles and books) mentions about twenty names (their contributions are higher in number) to which translated writings of Tagore are added. Among the names Ina Metaxa (an admirer of Tagore), Kostis Palamas (poet, who also contributed financially to the Golden Book), I.M. Panayotopoulos (MA, novelist, essayist, critique and social activist), and Dimitrios Th. Vassiliadis (indologist, writer, Sanskritist and Hindi Teacher, editor of two Tagore-Festschrifts, founder and president of the Hellenic Indian Society for Culture and Development (ELINEPA) and editor of the online forum INDIKA NET may be underlined. In the section on translations into Greek a wealth of titles is mentioned, among which is naturally the Gitanjali, first published as early as in 1921, and for the last time I have knowledge of, in 1978. Especially carefully edited and published is Μοχούα (‘The Herald of Spring. Poems from Mohuā’) in the translation of Antonis Martalis (Athens 1989). Translating and editing, as we are informed, happened in constant contact with Indians. Regrettably, Martalis died before publishing, but we, the audience have at least the satisfaction that the manuscript at that moment was ready for publication. Dimitris Vassiliadis edited two Tagore Memorial volumes, unique in their kind, in 2012 and 2016, in which, beside contributions, also translations have been published. Dimitrios K. Velissaropoulos, diplomat, philosopher, writer, translator, may perhaps still be added. His History of the Indic Philosophy (in Greek) was published for the 4th time in 1975. All the names and titles cannot, of course, be enumerated in this review.

The Hungarian contributions on Tagore are sometimes amazing. Imre Bangha is worth mentioning in first place, who is perhaps the best Tagore expert among his compatriots, with his astonishing 2011 contribution (in Hungarian), and which repeats and continues a 2008 one (in English).

R. Hajnóczy, spouse of the Semitist Julius Germanus, essentially a writer, is famous for her novel about the years spent in Shantiniketan with her husband, and the “proud” owner (as she expresses herself) of an entry in her Diary, in Bengali and in English, by Tagore. The entry is reproduced in the book under review. It is impressing to be informed that the collection Fireflies, on which Tagore worked in various countries, was finalized in Hungary (see p. 226).

István Záborszky, a Catholic prebendary and Theologiae Doctor published a remarkable Introduction in 1927 to Tagore’s thinking and to the Indian mind in general, parts of which had been published already in 1926, obviously so that he made it in time before the arrival of the Indian poet. The only critique by him, understandably, is that from a Christian thinker’s viewpoint: truth is the light given by Jesus-Christ. One will not participate – the Author remarks – in religious disputes. It is up to everybody how he or she understands earthly reality and the existence of and in the Universe.

Among the many names, still, Ervin Baktay and Desiderius Kosztolányi are to be mentioned. The first was the best Indologist in his country in the first half of the 20th century. He published two monographs on Tagore (1921, 1922), and a two-volume work on India (1932, 1941) in which his encounter with Tagore is also described. The case of Kosztolányi is worth of a special mention. A writer, poet, critique, journalist, he experienced a “tremor” during the Tagore Soirée in Budapest (1926). He went to attend with reservations against “readings of poems” in an unknown to the audience language (he did not know Bengali). And he admits that “he was listening to stupefied”. He changed his mind: “you first get to like a poem and you understand it later. What a great person this man is, how a great poet he must be” – he writes. No need to say that he published several poems by Tagore in translation.

Appendix C, as mentioned above, provides some photos taken by the Author, in Greece and in Hungary, one also in India by a third person, which are likely to be first experiences for an international audience. A research in the Historical Archives of the University of Athens brought to light an excerpt of the Senate Proceedings of the University for the year 1876: Musicologist Sir Raja Sourindro Mohun Tagore donated seventeen works on Indian music to the University (photocopy of the Proceedings acquired by the Author is reproduced; Sourindro Mohun Tagore was an elder relative of Rabindranath and was the greatest patron of Bengali classical music).

Sushant Kumar Mishra, Professor at the Centre for French and Francophone Studies of the Jawaharlal Nehru University in New Delhi has helped the Author, as we are informed in the Preface, in various ways, and also appreciates the present book in an Introductory Note. We thank him for his kind efforts.

The rendering of the Greek names and texts is wonderful. The orthography is perfect and the fonts applied are most appropriate. Not less the same can be said for what is there in Hungarian.