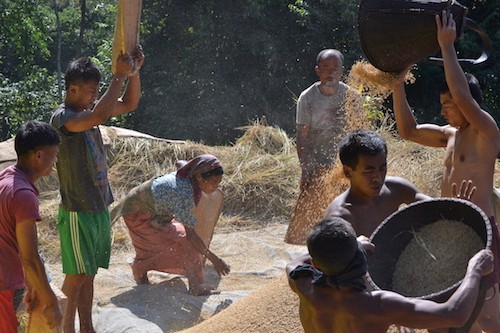 The International Film Festival of Thessaloniki that celebrates, this year, 20 years of life and 20 years of creative relationship with the fascinating art of the documentary, opened its curtain on March 2, 2018, in the packed Olympion Theatre, and in the presence of politicians, artists and prominent representatives of the audiovisual industry, and it will close on Sunday, March 11, with the award ceremony.

The festival will feature about 200 films from around the world, with world premieres, tributes and an Oscar atmosphere. India, which has a long tradition of participation in the Thessaloniki Documentary Festival, will be represented this year by Anoushka Meenakshi and Iswar Srikumar’s documentary “Up Down & Sideways“.

The Indian documentary is produced in 2017 and has already been awarded at various festivals. Stories of love, stories of the field, stories of song, stories in songs. Α musical portrait of a community of rice cultivators in a village close to the India-Myanmar border, and their memories of love and loss, created from working together on the fields. It is the first feature film from the u-ra-mi-li project (meaning “the song of our people”), a larger body of work that looks at the connections between music and labor, and the human need to transform the mundane into poetry.

See also, the South Korean documentary “Becoming Who I Was” by Chang-yong Moon and Jin Jeon that evolves in the Northern Indian Region of Ladakh. It is about a boy in a Buddhist community, who discovers that he is the reincarnation of a centuries-old Tibetan monk. As his surroundings recognize him as a living Buddha and start having extreme expectations, his aging godfather takes him on an epic journey on foot to discover his past and the essence of life.