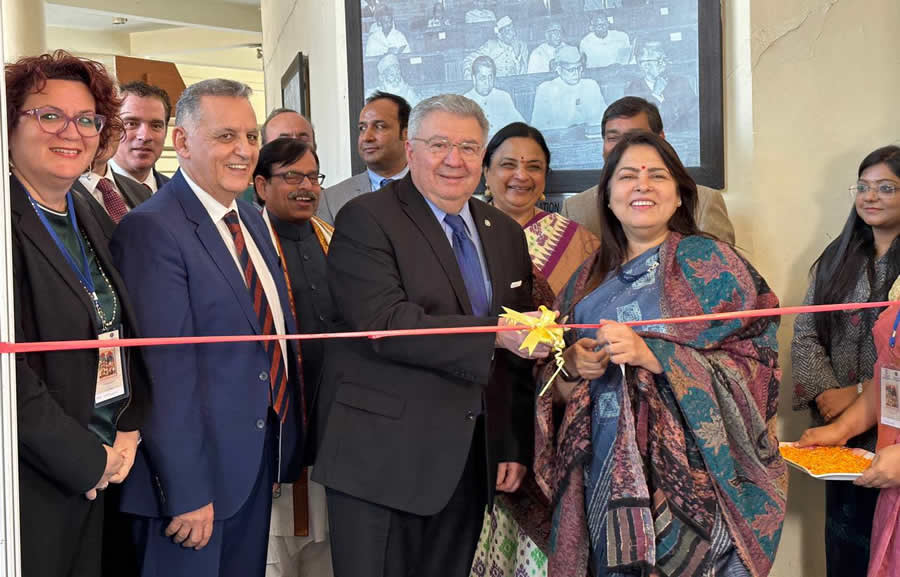 The long-standing and unbreakable ties of friendship, cooperation, and culture between Greece and India were at the center of the visit of the Secretary-General for Greeks Abroad and Public Diplomacy, Prof. John Chrysoulakis, to New Delhi from 11 to 15 December 2022.

Participation in the International Conference on Greece and India

During his stay in the Indian capital, Prof. Chryssoulakis participated in the International Conference “The Greek World and India: History, Culture and Trade from the Hellenistic Period to Modern Times“, organized at Jawaharlal Nehru University (JNU) in New Delhi by the chair of Greek studies of JNU and the Hellenic Institute of Byzantine and Post-Byzantine Studies in Venice with the participation of distinguished professors and researchers from Greece, India and other countries.

In his opening speech, as the keynote speaker at the International Conference, Mr. Chrysoulakis referred to the timelessness of the cultural and commercial relations between Indians and Greeks, focusing on the contacts and osmosis of the Greek World with India from antiquity to modern times. As he mentioned, Alexander the Great reached India and his descendants founded cities and kingdoms through which the Greek language and culture were spread to Central and South Asia. India was also a destination and an important place of trade during Hellenistic and Byzantine times. The influence of the Greek presence in India is historically evident in architecture, town planning, coinage, astronomy, medicine, and other fields. As he characteristically stated: “Alexander the Great became commonly accepted in East and West because the world he created became the largest international community the planet has ever known.” (Read the full speech HERE).

Upon completion of the opening speeches of the Conference, Mr. Chryssoulakis together with the Minister of State for External Affairs and Culture, Mrs. Meenakshi Lekhi, inaugurated the photographic and digital exhibition of a unique byzantine manuscript “Code 5” with a large number of miniatures which depict the life of Alexander the Great (including scenes from his passage through  India). Present at the opening of the exhibition were the Ambassador of Greece to India, Mr. Dimitrios Ioannou, the High Commissioner of Cyprus to India, Mr. Agis Loizou, as well as numerous academics, students and journalists.

The digital exhibition was organized by Jawaharlal Nehru University (JNU) in collaboration with the Hellenic Institute of Byzantine and Post-Byzantine Studies, Venice, and was hosted until the 16th of December at the JNU Convention Centre. Hundreds of students and faculty members had the opportunity to see these miniatures and admire the manuscript’s pages using state-of-the-art digital media.

The Hellenic Institute of Byzantine and Post-Byzantine Studies in Venice has a number of relics, images, and manuscripts, among which, perhaps, the most important is “Code 5”. It is the only surviving medieval manuscript in the world that extensively illustrates the life of Alexander the Great up to his death (including scenes from his passage through India).

Agreement on the expansion of bilateral relations

Mr. Chryssoulakis had a constructive conversation with State Minister Ms. Lekhi, in which, after recognizing that the historical ties of two peoples are expressed today through the strengthening and enrichment of bilateral relations, with a focus on education and culture, they agreed on the following points:

In a special ceremony organized by the Jharkhand Rai University on December 13, 2022, Prof. Chrysoulakis was awarded an honorary doctorate Honoraris Causa by the Chancellor Dr. Harbeen Arora Rai, and the Vice-Chancellor of the Indian University Dr. Savita Sengar.

The Secretary General for Greeks Abroad and Public Diplomacy Prof. John Chrysoulakis along with the Ambassador of Greece in India Mr Dimitrios Ioannou visited the location of Darshan Samiti, the place where Mahatma Gandhi spent the last 144 days of his life and was assassinated on 30 January 1948. They paid tribute at the Martyr’s column. They also visited the Gandhi Smriti Museum and signed the Visitors’ Book. They were warmly welcomed by the Vice Chairman of the Gandhi Smriti Shri Vijay Goel, whom they thanked for the warm hospitality.