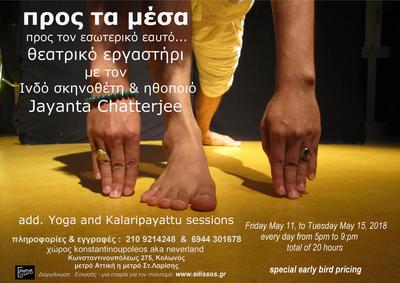 “Eilissos” a company for culture organizes a theatrical workshop with the Indian director and actor Jayanta Chatterjee which will take place for the first time in Athens and is open to anyone who is willing to explore less known “places” of physical theatre expression. The workshop alongside is addressed to professionals with interest and experience in theatre, performance or dance or drama / dance school students and martial arts.

Which action can be positively acceptable for the universe

Create a global coherence through theatre
​
Content of  the workshop
Conference. Subject on towards inward theatre project

Turning point. Understanding the relationship with the nature around us. Searching flawless intention for action. Convert all of this practice in to the performance In the year 1985 Jayanta Chatterjee was born in the Hindu Brahmin family. In his childhood held got his interest in martial arts and later he learnt that very well after he grown up. He completed his graduation in the year 2009 on the subject Drama and done his masters degree on Direction (Drama) in the year 2011 Rabindra Bharati University. The Excellency of soul made him so devoted to the Indian arts and culture. He became so generous about the spiritual instinct of Indian arts and culture. In the year 2008 he started to learn the perceptual content of Indian spirituality ( Ashtanga yoga and Indian philosophy ). And in the same year he joined Milòn Mèla – The Sources’ Research – Indian Performing Arts and started working with Abani Biswas (a collaborator of Grotowsky) director of the Sources’ Research – Milón Méla Project. For his tremendous research’s and work on that subject Indian ministry Of culture awarded him with two years scholarship. The subject was how a practice Of spirituality is effective and connected with the preparation and practice of an actor. Now he take theatre workshop in India and Europe for artist and a people how is interested to do yoga( Ashtanga yoga ) and martial art (Kalaripayattu).