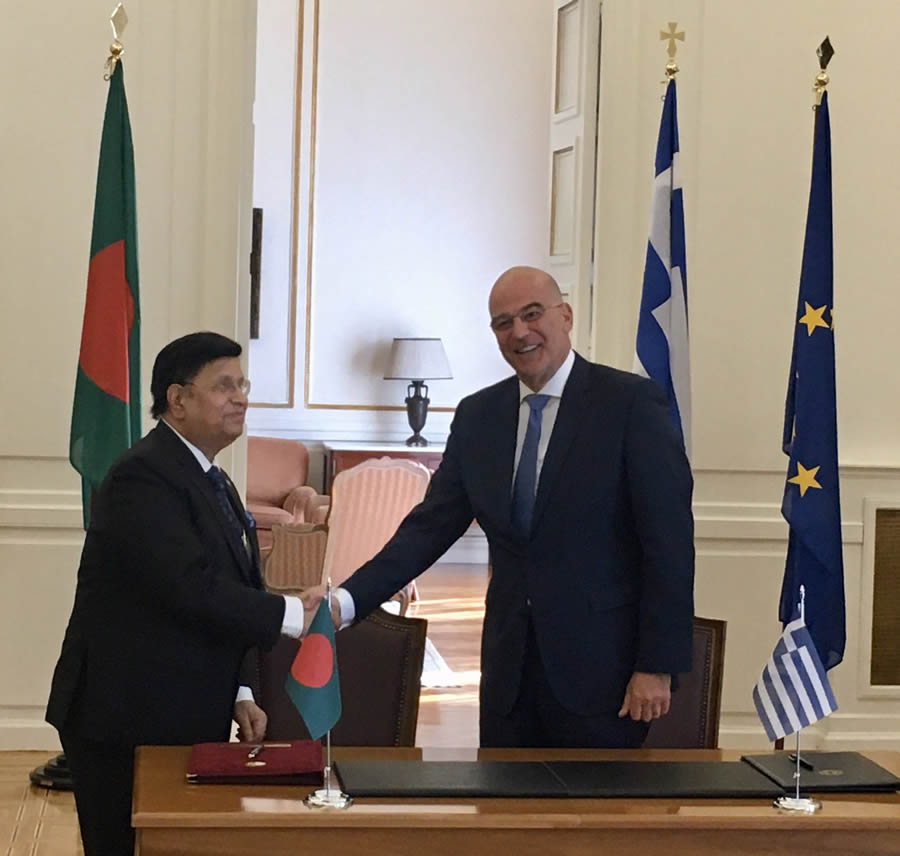 The Foreign Ministers exchanged views on all issues of mutual interests, with particular emphasis on the enhanced economic cooperation. Foreign Minister Dr. Momen invited Greek Foreign Minister to visit Bangladesh with a group of Greek businessmen to explore trade and investment opportunities, an invitation that Mr. Dendias readily accepted.

Foreign Ministers also discussed the regional and global issues and reiterated their commitment to strengthen cooperation in the UN and other international organizations on issues like climate change, migration, and supporting each other in different international bodies where Bangladesh and Greece share common views and positions. Foreign Minister Momen in this context highlighted the role of Bangladesh in global peacekeeping and peacebuilding, and the Culture of Peace promoted by Bangladesh.

Greek Foreign Minister Nikos Dendias praised the Bangladesh government for showing an extraordinary humane attitude while dealing Rohingya crisis and assured of support as an individual state and as a member of the EU in resolving the issue peacefully. He also appreciated Bangladesh’s leadership role in global migration discourse. The present migration issue in Europe was discussed, and both sides agreed to continue and further strengthen the mutual cooperation in the area of migration. On the issue of climate change, the Greek Foreign Minister explained their plan to host a summit next year to discuss the impact of climate change on the cultural heritage and sought Bangladesh’s support in this regard. Dr. Momen assured him that Bangladesh would stand ready to join any initiative to address the challenge of climate change.

Foreign Minister Momen briefed his Greek counterpart on the initiatives of Bangladesh to celebrate “Mujibborsho” – the birth centenary of the Father of the Nation Bangabandhu Sheikh Mujibur Rahman and invited the Greek Minister to join the celebration.

On the occasion of the visit of the Minister of Foreign Affairs of Bangladesh, the Athens Chamber of Commerce and Industry (ACCI) in collaboration with the Embassy of Bangladesh in Athens organized a presentation on the Bangladeshi economy as well as a discussion of the country’s business opportunities, on Tuesday, October 29, 2019, at 3:00 pm, held at the head office of ACCI.

This first-ever business seminar on Bangladesh in Athens was attended by the Foreign Minister of Bangladesh Dr. Momen, the President of the ACCI Constantine Michalos, the Ambassador of Bangladesh to Greece Md. Jashim Uddin, Member of the Board of Directors of the Enterprise Greece Dimitrios Kourkoulas, B5 Director of Economic Relation Anastasios Memos, GIBA’s General Secretary Anthony Papadopoulos, GIBA’s Member of the Board of Directors James Mimmikos, and other representatives from various business sectors in Greece. Read more about the business seminar HERE

Later in the evening, the Embassy of Bangladesh and Bangladeshi Associations of Greece held a reception in honor of the Honourable Foreign Minister of Bangladesh at a central hotel in Athens. The Minister departed late at night for Dhaka.