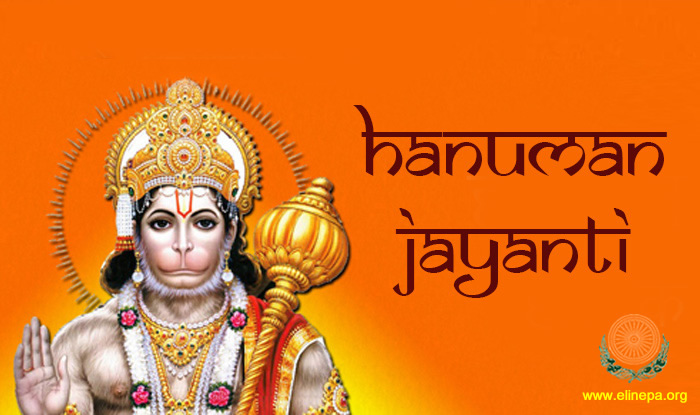 Hanuman Jayanti is a Hindu religious festival that commemorates the birth of the Lord Shri Hanuman, the greatest devotee (bhakta) of Lord Rama. The festival is usually observed on the full moon day of the lunar month Chaitra (March – April in the Gregorian Calendar), but in the states of Kerala and Tamil Nadu is celebrated in the month of Dhanu known as Margazhi in Tamil (December -January in the Gregorian calendar).

On this auspicious day, devotees flock Hanuman temples to offer special prayers and seek his protection and blessings. They recite special prayers like Hanuman Chalisa and Sundar Kaand paath, and read his miracles in the epics of Ramayana  and Mahabharata.  Householders perform puja and sing devotional songs (aarti and bhajans)  in his name. They offer some tulsi leaves, orange colored sindoor, and rose and marigold flowers along with Ganga water, chana murki and sweets especially laddoos, which are lord’s most favorable. Lord Hanuman is said to once have gulped down the sun confusing it for a giant laddoo. Sankatmochan, Dukhbhanjan, Maruti Nandan, Bajrangbali and  Pawanputra are some other names for the Vanara  (monkey) God.

Hanuman played an important part in Ramayana and helped Lord Rama to find and defeat the demon Ravana after Sita’s abduction. He is the son of wind-God Pawana and the symbol of strength and unflinching devotion. He has the ability to transform into any form at will, wield the long mace (gada) and other celestial weapons, lift an entire mountain with just one hand, and fly in the air at the speed of Garuda. Several later texts, however, present him as the 11th  incarnation of Lord Shiva born to the monkey King Kesari and his wife Anjani with the blessing of Pawana Deva (god of wind).

Lord Hanuman is worshiped as a deity with the ability to attain victory against evil and provide protection. The best way to appease Lord Hanuman is to worship his beloved Lord Rama. Chanting the name of Rama is believed to bring the Vanara God closer to the devotee. His murtis or idols are painted in red or saffron color that is associated with devotion and celibacy (Brahmacarya).